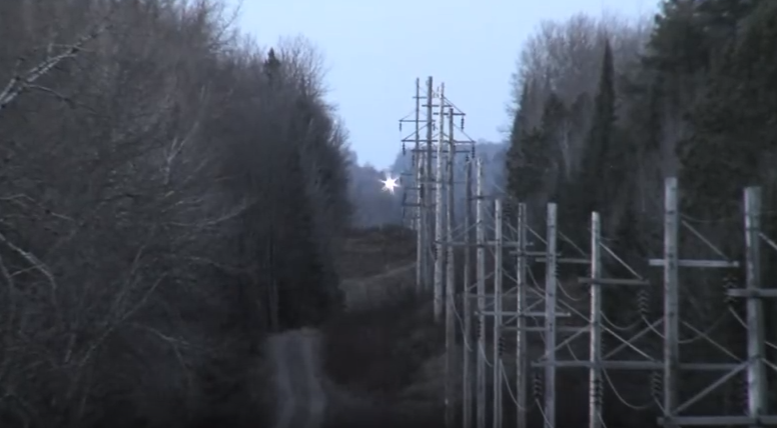 PAULDING — The Paulding light has been a mystery in the town of Paulding for decades, drawing in researchers and even film crews documenting the optical phenomenon.

When the darkness falls in the town of Paulding, the mysterious light appears.

“Back then, there was a lot of different stories about it but it boiled down to being like a train light going off in the distance, a ghost of a train but I’ve heard it in other stories too,” said Visiting Menominee Resident, Don Paul.

Sightings of the light have been reported for decades, while most claim the first sighting was in the 1960’s, others believe it was spotted even sooner.

“My cousin’s husband, Don has been coming here quite a while,” said Paul.

Some call it a spirit, others swamp gas, and skeptics identify the optical phenomenon as headlights. But what exactly is the cause of the beaming light over the valley?

“We took a pick-up truck and had them sit at the Adopt a Highway sign we saw, they turned on their hazards and flashed their brights. There was no cell service here back then but at dusk you could still see the car,” said Michigan Technological University Assistant Professor, Jeremy Bos.

While headlights were determined to be the most probable, other theories were also addressed.

“We have all these valleys here and especially early in the summer, it’s very cold in those valleys. So you have cold air and then you have a nice hot day, a warm layer will collect over the cold layer, and then when the sun sets, you have a cold layer between it. You have a sandwich effect and that can create an optical duct. One of the things we’ve observed but never recorded, just over the horizon there, used to be some blinking red lights from a radio tower and those would be visible just right before sundown and after sundown, they will disappear,” said Bos.

This original experiment was conducted back in 2010 but was re-organized this week for a special television program.

“They contacted me in May or June about coming out here,” said Bos.

Although these findings vary, not everyone believes the results.

“Sometimes it’s brighter than others, its always been in the distance and it’s very eerie looking to me,” said Paul.

This light has become an international phenomenon with visitors coming from all over the world to get a glimpse.

“It’s quite a popular place, it still is. There is never lack of traffic back here, any hours of the night,” said Paul.

The town of Paulding has drawn in various televions crews throughout the years, including a recent one working on an undisclosed special around the light. Onlookers come almost every night to get a peak of the light, some even camping out for hours. Others continue to bring their families and share the experience with others.

Despite the ambiguity of the underlining truth behind the light, the experiments conducted on site have been quite the learning experience.

“It’s an important part of the outreach that we do at Michigan Tech and as Scientists, we’re not saying you have to believe any one thing, we’re just providing the evidence and hoping that you can find something interesting in it,” said Bos.

The true mystery behind the light though lies in the eye of the beholder.