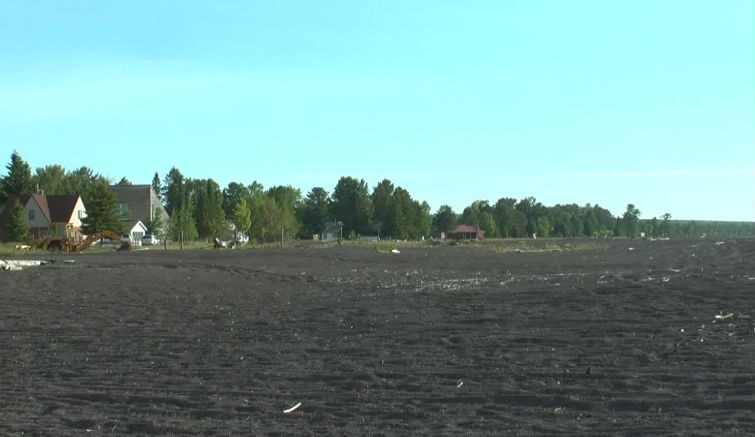 SCHOOLCRAFT TOWNSHIP — What’s left of the Keweenaw’s historic copper mining may be troubling for the environment.

The Upper Peninsula’s beaches and lakes attract many visitors each year, but what if the history of the area is impacting the view? This looks to be the case in parts of Schoolcraft Township. Over the past few decades, dark stamp sands have taken over what once was white sand as a result of past mining in the area.

Township officials said the stamp sands issue is the worst it’s ever been and the sands are now coming in faster and in larger quantities than ever before, despite being on a routine dredge cycle every four years. The sands now stand taller than the break wall, filling the canal that grants access to Lake Superior.

“It’s been filling in for several years, but now it’s getting worse with the elevation of the stamp sands on the side of the canal and it’s all blowing in. We have an emergency dredge program that’s going to happen here soon, but what we’re looking for is a long-term solution to the problem,” said Schoolcraft Township Supervisor Joel Keranen.

The emergency dredge is set to take place between July 1st and the middle of August. If a more permanent solution is not found, the surrounding environment will be negatively impacted.

“These camps around us here will be impacted by potential flooding. Also, what’s happening is Buffalo Reef is being impacted by that, that’s a natural spawning ground for lake trout,” said Keranen. “Some boats can’t get in here. Some larger
boats that want to come into the canal here can’t do it because of they’re about 85 percent blocked off and the depth, with the current water there is only about three to four feet. It’s getting worse and one more good winter storm or fall storm will completely block off the canal. ”

The Township has been working with the Army Corps of Engineers to draft a plan of action, but acquiring enough money to complete the project is difficult.