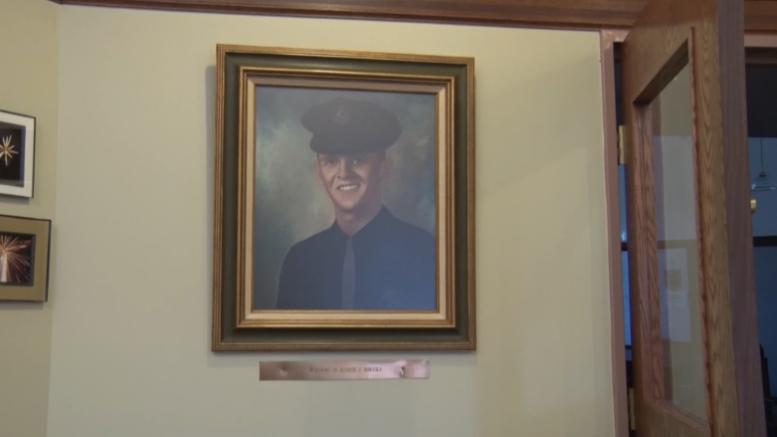 NORWAY — The family of fallen officer, Kenneth Moraska is working diligently to ensure that the man responsible for his death stays behind bars and is not given the opportunity of parole. ABC 10 spoke with a family member who is doing everything in her power to keep the man who murdered her brother in prison.

“I missed a lot of my growing up years because of that. Those are things I can never get back and I can never do over. How many other children would my brother have had? Who’s to say?” said sister of Kenneth Moraska, Mari Negro.

Kenneth Moraska, a Norway Police Officer who was killed by gunfire when responding to a domestic disturbance. Since this horrific day, the family feels the man who committed the crime isn’t the only one serving a life sentence and has been reported as not remorseful.

Edward Alsteens is the man responsible for Moraska’s death, who faces a life sentence on the charge of second degree murder.
But come July 11th of this year, Alsteens will go before a parole board to see if he would be eligible for parole.

Family and community members are doing everything in their power to keep this man incarcerated. A petition was started a little over a week ago and currently has over 1,200 signatures. The Moraska family was given the news of Alsteen’s possible parole on the 46th anniversary of the day Kenneth was buried.

“The month of May is a difficult time,” said Negro.

Not only locally, but police officers from around the country have shown their support for the petition.

“It has been just amazing, the people that have reached out to us and have been very supportive of this prisoner not being released. The support has been astronomical and I can’t thank people enough for the support they have shown our family,” said Negro.

The Moraska family fears having Alsteens back in the city where Kenneth was murdered.

“If he’s walking the streets and some people are just outright making derogatory remarks to him or even threatening him in some way, he might end up needing police protection. In that case, that could make him become quite paranoid or fearful, which could make him try to get back in the prison system again and end up shooting another innocent person or maybe another police officer,” said the brother of Kenneth Moraska’s wife, Tom Cowley.

If you are interested in signing the petition, you can find it by clicking here.. If you are in the Norway area, the petition can be signed in person near Ebeling’s Market on Main Street, where Mari typically is throughout the week.

Norway woman speaks out about petition on her dogs