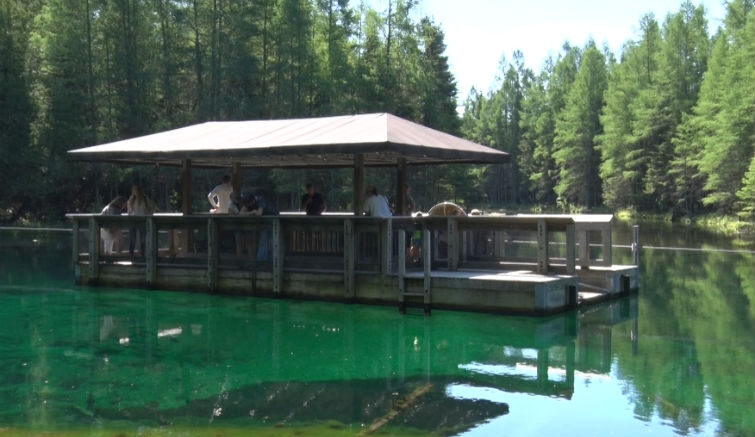 MANISTIQUE — It’s one of the U.P’s must-sees and attracts visitors from all over the world.

“Everybody takes something away a little bit different – the beauty of the lake, the area,” said Palms Book State Park Officer, Patrick Nelson. “It’s just a really unique feature and everyone really enjoys it.”

This is Detroit-native Patrick Nelson’s seventeenth year working at Palms Book State Park, home to one of the U.P’s greatest wonders, Kitch-iti-kipi, also known as Big Spring. This natural phenomenon is the largest freshwater spring east of the Mississippi and measures 250 feet across, 45 feet deep with water that sits at 45 degrees, year round. The spring is fed from underground, where more than 10,000 gallons of water gush from the bottom every minute from fissures in the rocks. Nelson said they believe that the water comes from somewhere in the Seney-stretch. The water from Kitch-iti-kipi then pools into nearby Indian Lake, which is fed by several different springs.

While Big Spring is unique all in itself, it’s history is even more so. Legend has it that it’s named in the memory of a great Indian Chieftain.

“They developed a legend of an Indian Chieftain who had to prove his love to his maiden,” Nelson said. “She wanted to swing from a bough and he was going to catch her in his canoe, but the canoe flipped over and he died and his spirit lives in a white dear that people see out here.”

But that fable is just that – a tall tale created by a yooper named John Bellaire, who was so incredibly passionate about the spring, he would close up his business, the Five-and-Dime in Manistique, to take visitors over and explore. The area was a mass of trees and nearby sinkholes, but it held a special place in Bellaire’s heart. His passion for the spring led to an agreement between Palms and Book Lumber Company and himself back in the twenties that would clean-up the area and ensure it was used for purposes as it is today. And so Palms Book State Park was created. The buildings in both that park and nearby Indian Lake State Park were built by the Michigan Civilian Conservation Corp, along with the famous self-guided raft. And though the park is closing in on a century of activity, it still manages to bring smiles to all who visit.

“The first time I was out here, my wife and I came out and it was pouring down rain. We came out here in our raincoats and it didn’t have a covered raft like it does now,” Nelson said. “We got here and the sky opened up and we had a beautiful rainbow right across the sky that lasted about 10 minutes. It was a really special day.”

The park is intimate in size, including just a gift shop, the raft, a boat launch, a river to Indian Lake, and of course, the Big Spring itself. But don’t let the size fool you, just last year alone, 70,000 people visited the park from all over the world.

“The strangest interview I’ve ever done was for a Norwegian radio station,” Nelson said. “He came out and just had a little tape and I thought ‘How very unusual, how would they even understand what I’m saying?’ Like I said, we’ve got people here traveling from all over to visit this area. And if you ever go online, and pull up the Big Spring, there’s hundreds and hundreds of entries of people being out here.”

Nelson said this attraction is so popular, it has even been a wedding venue several times. Like any State Park, Palms Book is busy in the summer, especially after school is let out. Nelson suggests visiting before 11am or after 7pm to maintain the intimate setting. But if you do come during the rushes, there’s plenty of room for picnics with a view while you wait for the raft. Nelson says there are two things that do confuse visitors, one being the name. Palms Book State Park, which is aptly named on all roadway signage, is the home of Kitch-iti-kipi, which is also referred to as Big Spring. All three get you to the same place, but beware, because the other confusion is the location.

“People will tend to follow their GPS. And in the U.P, a GPS can lead you stray, often times more than not. It’s best just to give a call, and we can give you directions out here,” Nelson said. “Or get a map. They’ve worked for 3,000 years and they still do.”

There is no swimming in the spring or fishing, even though those trout are certainly tempting. Palms Book is a day use park open from 8am-10pm. The only fees imposed to see the springs are those associated with a recreation passport, which is required to get into any State Park, and can be purchased at the Secretary of State.