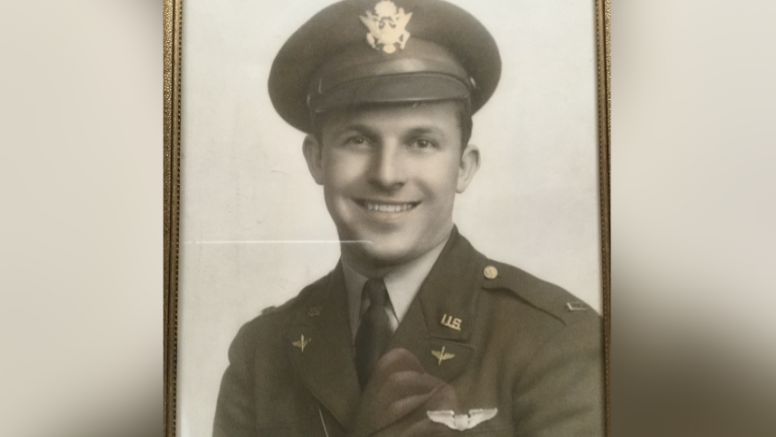 BARK RIVER — Although Memorial Day was earlier this week, one small Pennsylvania town has been honoring a U.P. Veteran for 75 years.

Lt. Fred J. Knauf, the Bark River native better known as the adopted son in the town of Nesquehoning, Pennsylvania.

“Meeting those people, you can’t but walk away and feel glad that, that’s where it happened,” said Niece of Fred Knauf, Jan Hood.

Fred originally moved to Bark River with his family at a young age. He graduated from St. Joseph’s in Escanaba in the year 1939 and later graduated from an Air force Academy in Texas. When Fred was in a single passenger plane on a training mission flying over the town’s surrounding area, that is when he ran into what is believed to be, bad weather.

“For whatever reason, he flew into the mountain and crashed. People of the town that day, said they heard the plane and saw it pass over, they thought the plane sounded fine. Suddenly though, there was a big boom and it was pretty much over,” said Niece of Fred Knauf, Jan Hood.

By the time citizens rushed up the mountain, Fred who was 22-years old at that time, was already dead. Fred had some big plans for the following day that were tragically cancelled.

“He had a big date the next day, with the woman he was going to ask to marry him, that day,” said Hood.

Four months after the accident that occurred on March 28th of 1942, Fred’s parents went to the site of the crash to leave a headstone for Fred. While there, residents of the town promised to take care of him forever. A promise that they have clearly kept.

“They honor him, they’ve almost enshrined him on the mountain. There is benches up there now, there is a flag pole with eternal light on it that shines 24/7, and there’s obviously the headstone that my grandparents had put there years ago,” said Hood.

Eagle and Boy Scouts often clean the area around the site and even rake leafs when needed. The town of Nesquehoning welcomes family members of Fred with loving arms.

“The people we have met out there have become family; we talk to them like they are our brothers and sisters. They talk about Fred like he was their brother, they call him their brother,” said Hood.

For the past 75 years, the town pays their utmost respect to Fred with a Memorial Day Service.

“They still every Memorial Day go up to the crash site, just like they would at a cemetery. They say a prayer, put a new flag up, they set up flowers, and do a dedication,” said Hood.

Jan Hood, who would be Fred’s niece, has just recently returned from this year’s Memorial service. When thinking about how this small town honors her late Uncle, a variety of emotions come to mind, from sadness and elation to pure honor. Since the crash, artifacts have been found and given to the family.

“One little lady had given my Father a piece of the plane that she had found,” said Hood.

Although Fred passed away on that fateful March day, his memory will never be forgotten with the help of the town’s residents.

“It’s something that I feel very confident saying, that it happens every year. They go up to his crash site, just for him and treat it like any other memorial,” said Hood.

A tradition that will always continue in Nesquehoning.