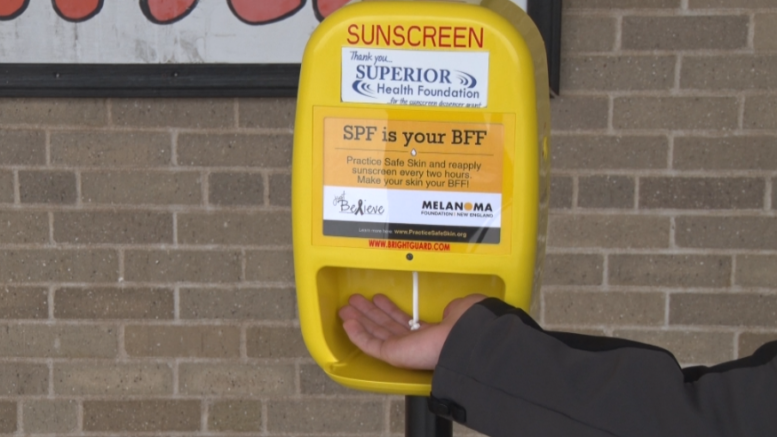 REPUBLIC — Local schools along with various other locations are fighting to raise awareness on skin cancer through the use of sunscreen dispensers.

One of these dispensers was just recently given to Republic-Michigamme Schools. This portable dispenser was created to prevent skin cancers or melanomas along with inform the students on the importance of being aware of these issues.

Athletes at the school are the primary users of the tool but any student passing by, is invited to use it as well.

“We set it out for practices but aside from providing sunscreen, which kids have never had here for after school activities, it’s a constant awareness and a constant advertisement that the sun can be dangerous and a daily reminder of it,” said Republic-Michigamme Superintendent/Principal, Kevin Luokkala.

The accessibility to sunscreen at this school was made possible through Just Believe, a non-profit organization created in memory of Jodi Ball who lost her battle with melanoma in 2013. The dispensers first became available last year, when the organization was awarded a grant from the Melanoma Foundation of New England.

“They are just important, people a lot of times forget the sunscreen and if you’re supposed to reapply it every two hours, it’s there and available,” said Just Believe Awareness Chair, Delight Hill.

These dispensers have also been distributed to other locations across the U.P., including a beach in Escanaba and at several baseball fields across Marquette County.

Just Believe looks to expand number of sunscreen dispensers across the U.P.