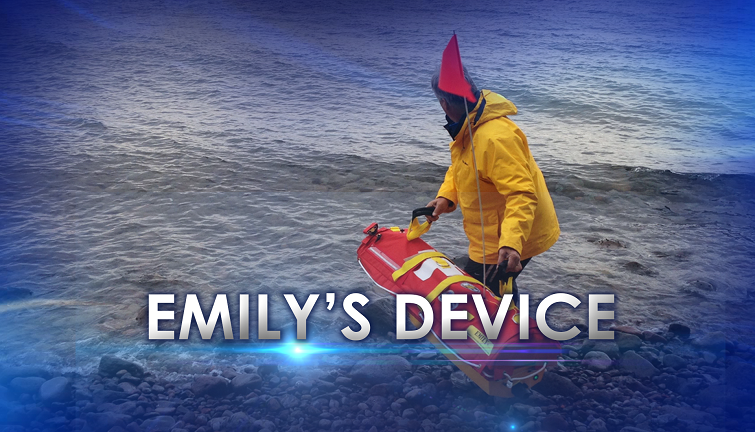 A bystander onshore, Justin Schroepfer, 24, from Rhinelander, Wisc. entered the water to try and save them. Tragically, Justin and one of the women, Kaylilyn Tansey, 22, of Grand Ledge, Mich. both lost their lives.

“The water was cold and it’s rough and we have to know the dangers of it,” said Kevin Schroepfer, Justin’s dad. “He knew this area pretty well. He went to NMU. He was basically trying to help somebody in need.”

Almost a year later, family and friends of the victims returned to Presque Isle Point Sunday to remember them and celebrate the new lifesaving equipment that’s now available for use at that location.
The Emergency Integrated Lifesaving Lanyard, or EMILY, is a remote controlled buoy that can maneuver through rip currents and other hazardous water conditions at 22 miles per hour to get to someone struggling in the water up to 1000 feet away.

It’s the only device of its kind on the Great Lakes.

“The equipment is designed like a miniature Jet Ski,” said Andrew Chosa, CEO of Great Lakes Unmanned Systems Center. “It’s got a single jet propeller; you can grab it anywhere without worrying where the propeller is. If someone calls and says there’s someone in trouble out at Little Presque, what’s the code, the dispatch officer will be able to give it to them. A single person can deploy this and get float out to them as quickly as possible.”

The EMILY device is stored in a box at the point. The lifesaving equipment was made possible thanks to contributions from the Keweenaw Bay Indian Community.

“I think it’s definitely a positive that can come from it is that there is something now, lifesaving devices that are easily accessible,” said Suzy Solin, Justin’s fiancée.

“What happened here after the loss was just amazing,” said Kevin Schroepfer. “Almost instantly things were erected here for lifesaving. The community just grabbed a hold of it and we weren’t even here.”

In honor of Justin and Kaylilyn, a plaque telling their story now stands near the point, warning others how dangerous Lake Superior can be.

“Well I can tell you one thing: he would’ve probably used it that day. And as he stood there on the shore that day, I know he wanted to help,” added Kevin Schroepfer.

Snowman appears on US-41