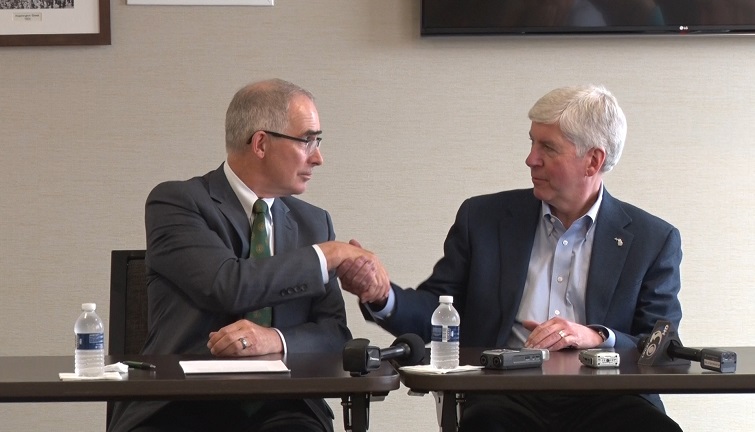 MARQUETTE — The Upper Peninsula has 25 different Economic Development Organizations (EDO) dedicated to bringing economic advancement and growth to their specific area. A cluster of local business leaders announced the formation Friday of a new regionally focused private-sector economic development group that’s dedicated to bringing that growth and advancement to the region.

For now, the effort is being called the Upper Peninsula economic development initiative. The idea was spearheaded three years ago by Bob Mahaney, President of the Veridea Group.

Statistics show the U.P.’s population and labor force are both on the decline, and there are more people living here that are not working than are working (. This new EDO will work together to reverse those current trends to bring more economic opportunities to the area.

“We will hold ourselves accountable. We will deliver results. I can’t stress that enough,” said Mahaney. “Those results will be measured in terms of job growth, income growth and population growth.”

“Your goal should be to say how do we create that critical mass by combining resources, having access to more good people, talented people,” said Gov. Rick Snyder. “This will not happen overnight, but you’ve got tremendous assets to build on, beginning with such talented people.”

Governor Rick Snyder and Lieutenant Governor Brian Calley both attended the announcement. The organization’s name will be released next month.

They still have to hire an executive director and find a main office, with hopes of opening for business in the fall.