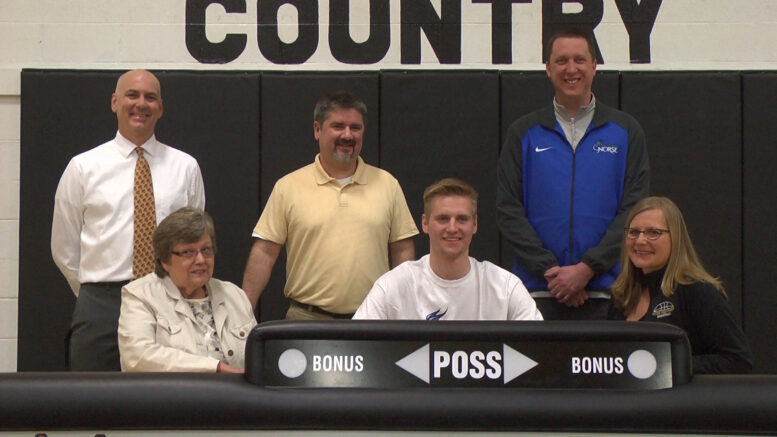 GWINN — In the past month, the Bay College men’s basketball team have added several high–profile U.P. players to their team. But they were lacking one thing: size. And today, that size come in the form of a Modeltowner from Gwinn.

Reed Wiedenhoefer signed his national letter of intent to play for the Norse. He averaged 18 points and 10 rebounds per game this past season. He talked about what attracted him to sign with Bay College.

“Really it was Coach Johnson. He’d come down to the games and afterwards he would come and talk to me and tell me everything that Bay College’s basketball team is going to be about, how we’re going to do everything right and I just fell in love with that right away. Being close, only an hour away from my hometown, I’m really excited for that. I feel like I’ll always have a great fan base there for me. That was definitely a big part in picking Bay College because I’m right near home,” Wiedenhoefer said.

“Reed has a combination that we don’t often find across the U.P. He’s a big, strong kid, but very skilled for his size and his strength. And unfortunately, we don’t see a whole lot of that across the U.P. We’re pretty small across the board. That’s what jumped out at me first. But what I really fell in love with was the more conversations that I had with Reed, the more I talked to Coach [Finkbeiner], the more I talked to other coaches that he played against, everybody raved about him. I think he’s under the radar a little bit. I think his skill level and the combination with his size and strength, he brings something to the table that’s exactly what we need. I’m excited to get in the gym with him. He’s just one of those kids that does things the right way,” Norse head coach Matt Johnson said.