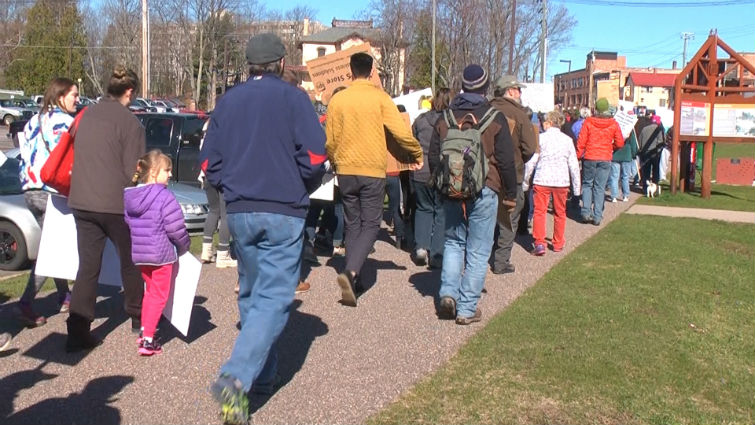 MARQUETTE– The Northern Climate Network hosts an annual climate march every fall, but this year activists around the globe decided it was time to raise awareness this spring.

Dozens of locals gathered at the Marquette Commons Saturday morning, some with coffee and tea, but many with signs. Saturday’s March was hosted on the 100th day of President Trump’s administration.

According to the Northern Climate Network the march is not meant to take political sides, but show the administration how many people are concerned for the climate.

“I’m marching today because climate change is the biggest threat to our planet right now,” marcher Genvieve Hely said. “Marquette is such a great community, and with the college it is so great to be able to get involved up here, because where I am from this kind of thing wouldn’t be happening.”

“Carpooled down here from Houghton County and Baraga County and we’re so happy this is being put on,” marcher Catherine Andrews said. “The climate march means everything to us, I think it’s the number one priority right now because can’t have jobs on a dead planet.”

The Northern People’s Climate March and Festival lead families, students, and the elderly on Iron Ore Heritage Trail then down Washington St.

To get involved with the Northern Climate Network click on the link.

Enrollment numbers down at NMU