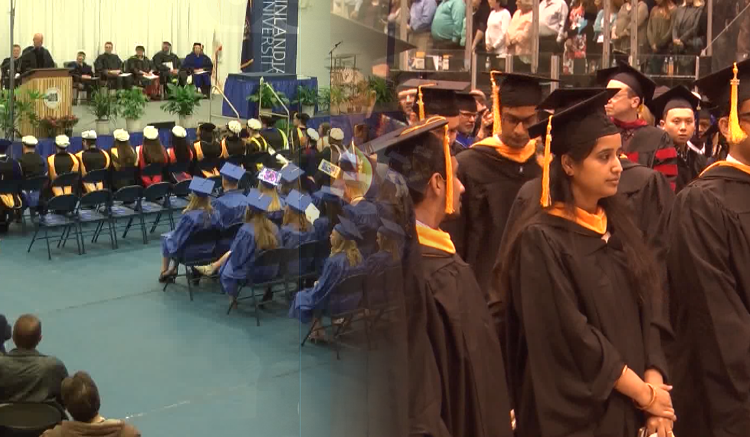 HOUGHTON — With degrees in hand, Michigan Tech students are ready to take on the world.

As the 2016-2017 academic year comes to a close, graduates from Michigan Tech are set to put their education to work.

Though most are heading to their new jobs, there are things they will miss about being at Tech.

Civil Engineering major Michael Sommers said, “This area up here, and the community around it, has just been amazing. To be a part of different organizations and groups and to come together and the things that we’ve accomplished up here is just amazing and it’s going to be kind of sad that you’re not part of that now anymore, but still keeping in touch with them, definitely.”

You could see the Husky pride on these graduates just by looking at what they wore.

Environmental Engineering major Terrianna Bradley, and past president of the Tech Chapter of the National Society of Black Engineers, said, “This is a kente cloth, which is a traditional cloth in African-American graduates. What it represents is just our heritage and how our unity comes together around this time of year when we are graduating.”

Michigan Tech has been ranked 2nd in the state for highest starting salaries for graduates.

HANCOCK — The commencement address was delivered by Manu Virtamo Consul General of Finland to New York.This was the first visit to the Copper Country for the native Finlander.

Virtamo said, “It’s always wonderful to be part of this kind of occasions, meet young people who have just concluded one of the most important phases in their development and who are ready to step into the next phase and meet all the challenges that are awaiting them.”

McLaughlin said, “If you look at joining the Army, it’s all time management, and being able to balance between ROTC and school and hockey as well, I thinks it’s set me up very well.”

Over four dozen graduates received degrees at the ceremony.

Yik Yak Lawsuit may be settled next month