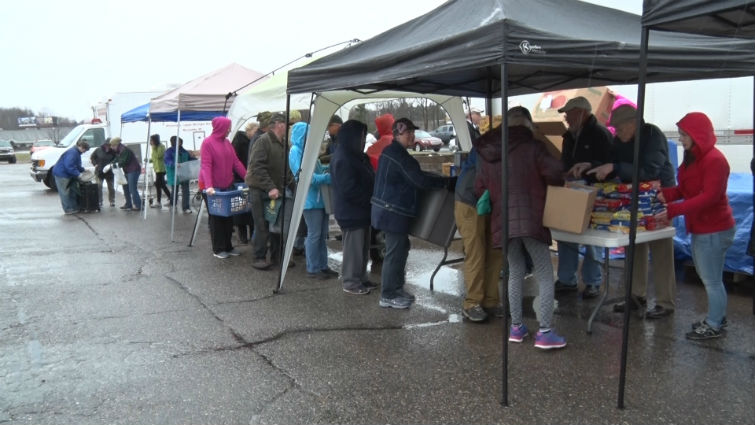 The goal is to feed 400 families with nearly 15,000 pounds of food. The rainy weather didn’t stop volunteers from handing out items such as fresh fruit, vegetables, and dry goods. Locals brought bags, boxes, and laundry baskets to be filled to the brim at the Salvation Army.

“It’s incredible it’s raining outside but people are just so grateful for their food,” Salvation Army Capt. Doug Winters said. “Some of the people depend very heavily on food pantries for their food to make it through the month. So we’re just in a real air of excitement, getting food into peoples’ hands just ties right into our mission.”

“Oh my gosh, I am just totally blown away by the amount of volunteers we have, the amount of people we have here to receive the food, and it’s just so neat to see the community coming together,” Rotaract Club Advisor Rachel Harris said.

The NMU Rotaract Club has been fundraising for to put on the mobile food drive for several months.

According to Harris the Rotaract Club is the college version of the Rotary Club and was started four years ago at NMU.