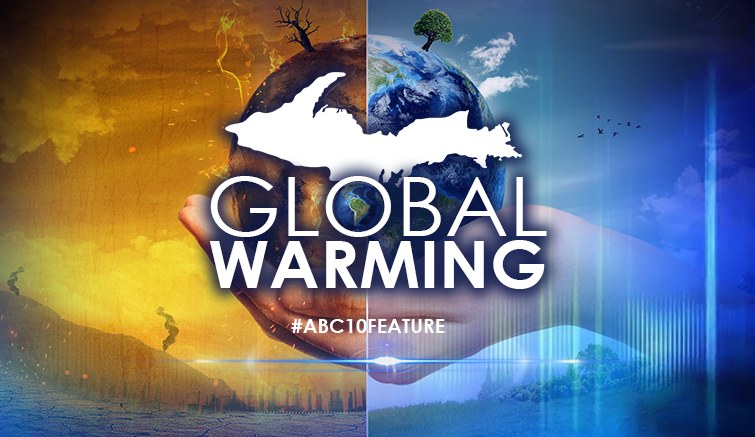 MARQUETTE — In this weeks ABC 10 Feature, Lauren Lee sat down with one local organization to talk about Global Warming in the U.P.

“The impacts of climate change in the U.P. can fall into three buckets; there’s the wetter wets, the dryer dries, and more extreme weather events like straight line winds and tornadoes. The wetter wets means that we are going to get more rain and more intense rain storms with higher amounts of rain fall at once and snow fall at once. There’s drier drys when it doesn’t rain those are going to be longer periods which those could make wild fires worse, especially in the fall. It could also change peoples well levels, that could make it harder for your well to work properly.”

Studies show the U.P. has experienced lake shore erosion, declining inland lake levels, and the depletion of aquifers, all causing the disruption of municipal services. Other issues include public health and invasive species.

Extreme weather conditions, that we have witnessed even this week, have cost local units of government millions of dollars of operating expenses during the past year. On average the U.P. gets one tornado a year – but in 2016 there was six.

“One year is not a trend but there is concern that that could become more common. Where because we know what fossil fuels have been burned and are in our atmosphere there is more energy available to have these bigger storms, even here as far North as the Upper Peninsula,” Hill said. “The impact of that is that we see our roads, our utility poles, they weren’t built for these bigger storms.”

One local group is thinking of ways to prepare for these upcoming changes.

The Marquette County Adaptation Task Force is made up of local elected officials, educators, and people from the environmental community.

The task force is action oriented and educational, with aims to help local communities think proactively on conditions brought up by climate change.

The CATF does not discuss the basic underlying causes of climate change or bipartisan beliefs. The groups core values lay locally, with an understanding that extreme weather events are occurring and will have an impact on the U.P.

“The idea is that we need to do things in anticipation of many of the things that we see happening around us,” Bob Kulisheck Chair of Marquette County Climate Adaptation Task Force said. “We are committed to providing people with information about climate change and also how it impacts a local area. We want to help people find solutions to problems and also find funding for community programs that might be able to address these issues.”

THE CATF in cooperation with Superior Watershed Partnership has helped the community commission multiple adaptation plans.

The Task Force also has a subgroup that has so far reached around 300 members in the Northern Climate Network consisting of locals, students, and faculty members.

“If anything the recent political changes underscore the need for local people to come together to try and figure out how to deal with local problems,” Kulisheck said.

“Things like sea level rise, more drought, will make other places harder to live,” Hill said. “We’re a place that’s actually going to do relatively well, although we do need to be prepared.”

The organization is working to implement education to K through 12 students.