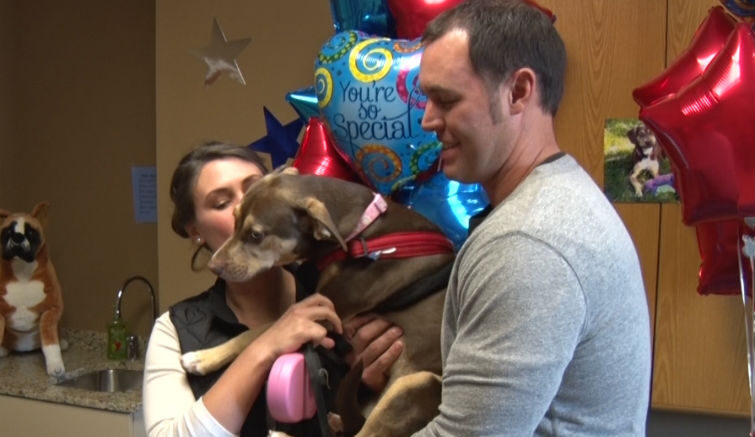 ESCANABA — Peanut the Dog, who is credited with saving a three-year old child last month, made a special appearance at a local animal shelter so the public could come thank the hero herself.

On the morning of March 17, Peanut was being her typical, rambunctious self, dashing around the house, asking to be let outside. Her owner, Kyle Frisk, put her on her leash and noticed she immediately bolted to the back side of the yard, an uncommon action for her. Kyle walked towards her to investigate when he started hearing noises that eventually lead him to a little girl, who was curled up in a ball, naked. Kyle took immediate action and called the police, rescuing the three-year old.

“It was incredible that Peanut knew that she was out there,” Kyle said. “I’m pretty sure Peanut was watching her from the windows on the second story, and saw her walk into the field. Peanut loves kids, loves people so she wanted to go play and she was telling me that. It was pretty incredible that she saw the little girl and came and got me.”

Peanut, who is only 15 months old, was adopted eight months earlier from the Delta Animal Shelter by Kyle and his wife Kathryn. Kathryn had logged onto Facebook in July of 2016 and Peanut’s face was front and center. After reading about Peanut’s abusive past, Kathryn was unable to get the puppy from her mind and after a series of very fortunate events, Kathryn and Kyle were chosen by the shelter to take Peanut home. Now, the Frisks are using Peanut’s limelight to raise awareness for animal abuse and put an end to the cruelty.

“To me, I couldn’t understand how someone could hurt a dog; she was just a puppy around four months old when she was brought into the shelter,” said Kathryn. “She was so loving and carefree and just a good dog. Her history made my heart melt. I work in healthcare and want to save everything that I possibly can, it’s just out nature. We absolutely love her.”

Kyle and Kathryn aren’t the only ones impressed with Peanut and her heroic tale. Community members lined up at the animal shelter today to pay their respects to the four-legged hero and shower her with treats and attention, which Peanut certainly didn’t mind.

Animal shelter ready for biggest fur-raiser of the year