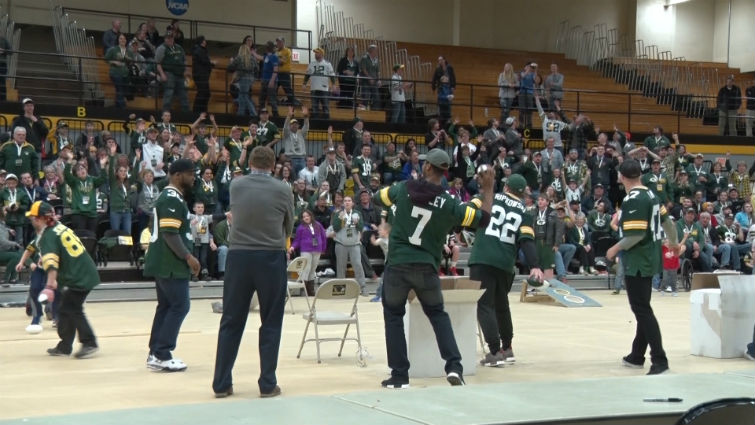 HOUGHTON–Many Yoopers have made the trip to tailgate at Lambeau Field. Thursday night the Green Bay Packers traveled to the U.P. to tailgate in Michigander stomping grounds.

The tailgate at Michigan Tech University did include some football but the event is in honor of Dial. Dial Help Community Support and Outreach Center is the sole non-profit crisis center in the U.P. Dial offers a crisis hot line, support for those at risk of suicide, and sexual and domestic violence support.

Packers players said they are proud to support a good organization with a great bunch of fans.

“You know coming to Michigan it’s really truly crazy to see how many Green Bay fans there are. It’s great I mean if you look behind me, look who’s following it’s unbelievable,” Linebacker Jake Ryan said. “I don’t think any other team does a tailgate tour like we do traveling through Wisconsin, I think we have been to Iowa a couple years before this. It’s just a great thing our program does just to help out the community.”

During the tailgate players answered a wide range of questions from fans Will the Lambeau Leap live on? How many touchdowns were there this season? One super fan even tried to hear the upcoming draft picks. Sadly the future draft picks were not shared with the packed crowd, but a Green Bay legend did comment on current running back Christine Michael.

“He is explosive, he is not as big as Ty but he has another gear, and a different back is always good to throw in a change-up back,” Running back Ahman Green said. “When I was playing I had Tony Fisher and Andrew Davenport, we were all three different running styles, the defense had to adjust to during the game. To have the option to go from a Ty to a Christine or whoever other back they might pick up. They have Don Jackson now so that’s a nice combination to have three backs, not rotate but come into the spot to give Ty a break.”

Tonight the Packers CEO Mike Murphy said he practically considers the U.P. Wisconsin. Although one Detroit Lions tie was playfully thrown on stage-there was no Lions Pride tonight from the Michiganers.