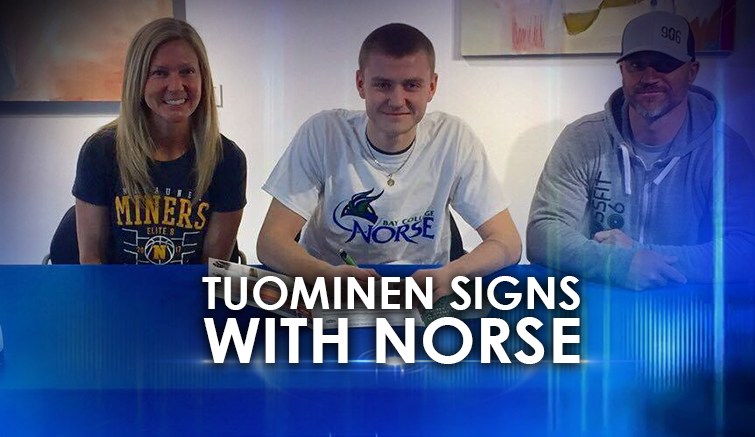 NEGAUNEE — After two years of falling short, point guard Dre Tuominen led Negaunee to a district and regional championship in his senior year with the Miners. And now he is taking his talents to Bay College to play basketball for the Norse.

“It started out this summer, right when they first got the program going. Coach [Matt] Johnson called me up and he gave me a rundown about what he was looking for and what the program would be about. That’s what introduced me to it so I always had that in the back of my mind during the season,” said Tuominen.

Norse head coach Matt Johnson attended the vast majority of Tuominen’s games this year, which was one of the factors that went into his decision. Another was the chance to play nearby so his family and friends can come see him.

“I know my mom didn’t want me going downstate and I know she didn’t want me going out of state because I’ve always been her baby. Since I was her first kid, she wanted me to stay home, so at the end of the day, I knew it would be nice to stay close so they can be at all my games,” Tuominen said.

“Me and Marcus have been kind of talking on the side like “Have you decided if you’re going to go there yet?” or have I decided. I said once I went downstate and visited Mid–Michigan, I would know for sure if I wanted to go to Bay or Mid–Michigan. But after getting back and finally thinking everything over, I decided that I wanted to go to Bay. So I let Marcus know, and then Marcus signed his NLI last night. And then I had a tour set up at Bay today so it was perfect timing to sign it today,” said Tuominen.

Coach Johnson believes this signing will do a lot for the team in regards to recruiting more players from the U.P.

“I think it absolutely legitimizes us. It makes us legitimate in other recruits’ eyes. They see somebody that they’ve played against and know the caliber of player Dre is and they’re going to be excited to play with him. I assume that it just adds some credibility to us as a program,” Johnson said.

And Negaunee coach Dan Waterman agrees that Bay College is getting a special player in Tuominen.

“In signing Dre, I think he got an absolute steal. He’s getting a great leader. A kid who knows basketball, who eats it, sleeps it, breathes it. And for starting a program, I think that’s the kind of kid you want to start with,” said Waterman.

Tuominen says he hopes to be an inspiration to all players who want to play college basketball.

Tuominen is planning to sign up for the nursing program at Bay College.

Waterman explains his move to Negaunee