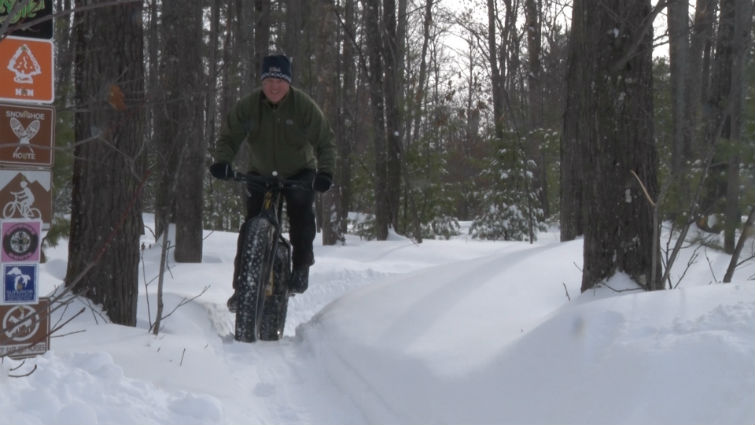 MARQUETTE– Marquette is known for its beautiful trails, which are well kept up thanks to volunteers and donations from locals.

According to Down Wind Co Owner Jeff Stasser fat tire bikes aren’t just for avid mountain bikers. The bikes’ typically have a three and a half inch to five inch wheels, running at a lower pressure allowing you to ride on snow or sand.

“The trails in the Marquette area are definitely the driving force behind making Marquette the fat bike destination, really in the World. People are traveling from all over the country to ride the trails that we have here in the county,” Stasser said. “We’re getting a lot of recognition for it, so I guess I would encourage people that own a fat bike or use the packed down trails to support it.”

“It’s just slower, you’ll ride the same section of trail that you might in the summer time. It takes you twice as long to do it, but it’s just a different experience. It’s much quieter, just the snow absorbs a lot of the sound,” Single Track Chairman Lyle VanderSchaaf said. “For what looks like a smooth clear trail, you have to pay more attention than you would think, just because of the little details of the surface.”

The all year round bike is apparently easier to get around on than many think. Ramblin Man trail at the Forestville Trailhead was built over the summer, making this the first winter it will be groomed. The Noquemanon Trail network asks for a ten dollar per day donation for trail use.

Strasser said supporters can also purchase a seasonal trail pass at Down Wind and other local shops.

The Noquemanon Trail Network offers ski rentals from 10 a.m. to 4 p.m. Trails are puppy approved so skijoring harness’s are available as well.

“Since probably 2003, 2004 we have been continually adding new trails, new terrain for people to enjoy at this Forestville location. We probably have 45 killometers of groomed cross country ski trails,” Noquemanon Ski Chairman Laurie Weeseen said. “I heard the term “take a forest bath” recently and I think of that when I go skiing now. I get out of the house, I go into the woods, listen to the birds, and I really enjoy the experience.”

For more information on fat tire bikes and the Noquemanon Trail Network click on the links.