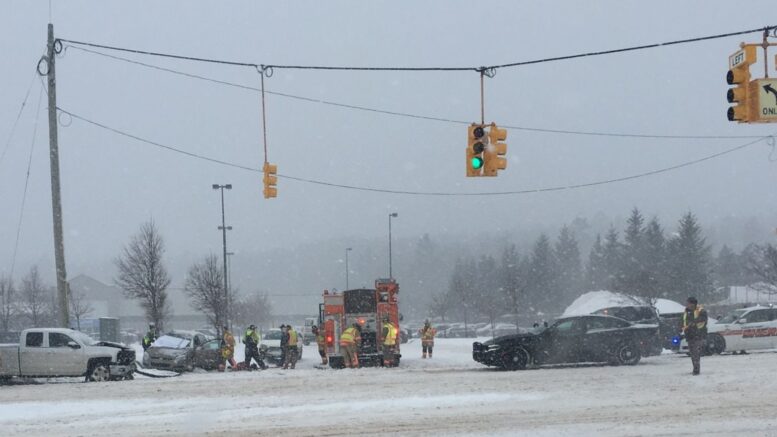 The names of those involved in the fatal accident that occurred Tuesday afternoon in Marquette Township have been released.

The Marquette County Sheriff’s Office says Laurel Jean Eagle, 63, of KI Sawyer, died as a result of her injuries sustained in the accident. The accident happened just before 12:30 p.m. on US-41 near Walmart.

Eagle was a passenger in a westbound 2007 Chevrolet Malibu that was attempting to turn left into Walmart parking lot, when it was struck by an eastbound Chevy Silverado. She was extracted from the vehicle by the Marquette Township Fire Department.

The driver of the truck, Daniel John Rivord, 42, of Ishpeming Township, sought his own medical treatment. The driver of the Malibu, John Anthony Eagle, 65, of KI Sawyer, was treated and released at UP Health System – Marquette.

The Marquette County Sheriff’s Office is still investigating the accident. They’re asking anyone who witnessed it to call them at (906) 225-8434.

One person was killed after a two-vehicle accident Tuesday afternoon on US-41 in Marquette Township.

The deceased has been identified as a 63-year-old woman from KI Sawyer. She was riding in a 2007 Chevrolet Impala when it collided with a full size Chevrolet pickup traveling east.

The woman’s 65-year-old husband, also from KI Sawyer, was driving the Impala. He was attempting to make a left turn into the Walmart parking lot from the westbound lane when the car collided with the pickup.

The driver of the pickup truck, a 42-year-old Ishpeming Township man, was injured. He sought his own medical treatment.

The names of the people involved are being withheld at this time. The Marquette County Sheriff’s Office is asking anyone who witnessed the accident to call them at (906) 225-8434.

MARQUETTE — At least two vehicles were involved in a personal injury accident on U.S. 41.

Emergency crews responded to the accident at the corner of County Road HQ and U.S. 41 in front of Wal Mart in Marquette, around 12:30 P.M. on Tuesday. A passenger vehicle and a Chevrolet Silverado pickup truck were involved in the accident.

At least one person is injured. Traffic at this intersection is currently at a stand still as emergency crews clean up the scene. The Marquette County Sheriff’s Department, Marquette Township Fire, Michigan State Police, UP Health System EMS, and Marquette City Police assisted on the scene.

Stay with ABC 10 for additional details as they become available.

Accident with Case Loader sends one to hospital

Cause of death determined for man killed in shooting incident