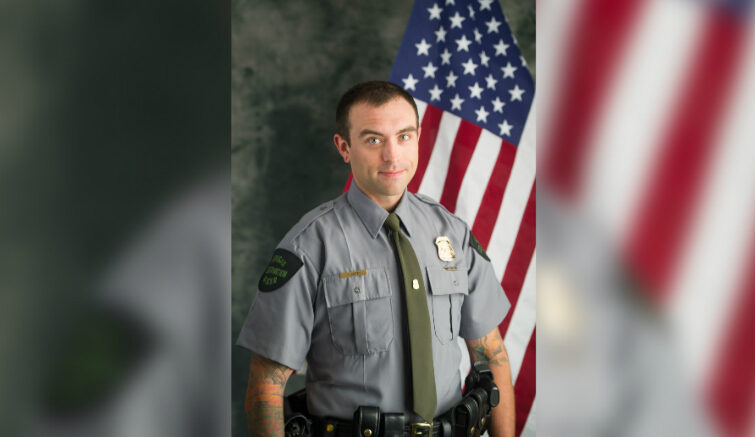 DELTA COUNTY — Michigan Department of Natural Resources Conservation Officer Patrick Hartsig rescued a 10-year-old boy Sunday, who had run away from his family near Gladstone in Delta County.

The incident was reported at about 4 p.m. The boy, whose name was not being released, had run away from the Log Cabin Grill and Bar, which is situated south of Gladstone, along Lake Michigan.

To reach the lake, the boy had cross four busy lanes of traffic on U.S.-2. His mother last saw him heading east across the ice.

Hartsig had been working snowmobile patrol in adjacent Alger County.

“On my way home, I heard a call on Delta dispatch of a runaway special needs boy that was somewhere south of Gladstone, on the ice on Little Bay de Noc,” Hartsig said. “I checked in with dispatch as I was near Hunter’s Point and launched my sled.”

Hunter’s Point has a boating launch site on the Stonington Peninsula side of the bay.

“With Conservation Officer Hartsig being out there on a regular basis, he had up-to-date accurate knowledge of potential bad ice areas,” said Lt. Eugene “Skip” Hagy, a district law supervisor with the DNR Law Enforcement Division’s district 2, which covers the easternmost six counties in the Upper Peninsula. “Normally, there is a shipping channel open in this area, but he knew it hadn’t been used in a few weeks, which allowed a more direct response.”

It wasn’t long before Hartsig located the boy.

“I found him with no shoes on, wandering around about a mile away from shore,” Hartsig said. “There was no one around him. There was one old ice shack. No one was in it.”

The boy was wearing jeans, a shirt and a jacket, but had no hat or gloves and his stocking feet were wet and cold.

“He was crying, he was scared,” Hartsig said. “I asked him where he was going and he said he didn’t know. He said his feet hurt.”

The day was very cold on the ice with temperatures in the teens and 25-30 mph winds.Map of the Gladstone area where this incident occurred.

Hartsig, who is a first aid instructor and former paramedic, took off the boy’s socks and warmed his feet. He then put his own boots, gloves and snowmobile helmet on the child.

Hartsig sat the boy in front of him on the snowmobile and the two sped across the ice to the Michigan State Police post in Gladstone, which is situated not far off U.S.-2, along the lakeshore.

There, the boy’s mother, a county sheriff’s deputy and an ambulance were waiting.

“Pat’s quick response, while having the right tools, training, and local knowledge of his work area, turned a bad situation around before it could get worse,” said Sgt. Jerrold Fitzgibbon, who oversees conservation officers, including Hartsig, in Alger, Delta and Schoolcraft counties. “This could easily have ended poorly for the boy had Pat not been there and located him as quickly as he did.”

Hartsig was hired by the DNR about two years ago. He has patrolled Delta County since. He is originally from Romeo, located in Macomb County.

Snowman appears on US-41