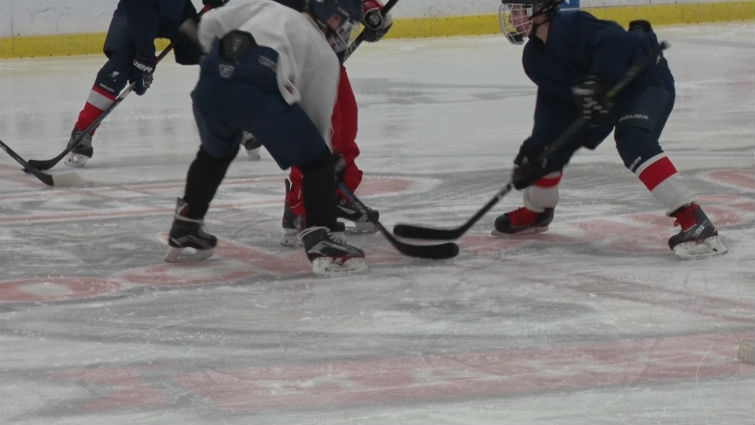 MARQUETTE– A goalie with 15 shutouts and the team has a 29 game win streak this season.

The Trimedia Junior Hockey team’s lineup consists of boys 12-years-old with the exception of one 11–year–old, all from the Marquette area. The players have been a part of the Trimedia team for four years, but have all been together on the ice for six.

“One of the things to be successful is you have to like each other and all these kids get along, they’re fearless,” Head Coach Mike L’Huillier said. “They love the game and that’s why they’re successful. It’s hard to say that “Oh wow they got good coaching or they have been together all these years,” but you still have to put it together. You still have to have a team that wants to win and hates to lose.”

“I think the team is working together and playing as a team, instead of playing individually,” right wing/forward Jack Sides said.

This weekend Trimedia will face–off against Calumet and Houghton. Win or lose the boys qualify for State finals, but only one of their upcoming U.P. opponents will make it to the State Tournament. With the regular season coming to an end, the team looked back on their season accomplishments.

“Probably the championship in Traverse City, because we have played in that tournament for three years and this is the first year we have won it,” center Drew Dellies said. “We have gotten close the past two years and we got it this year. I scored the game winner.”

“I was really surprised when we beat Traverse City, which is probably one of the best teams in the State,” L’Huillier said. “I expected us to be good, but I didn’t expect us to go 29–0–3. That’s probably a record, that’s probably never ever going to be beaten.”

L’Huillier said by luck the State Tournament will be hosted in Marquette this year. Bringing 16 of Michigan’s best teams. Finals will take place March 3rd-5th at Lakeview Arena.

“I expect 2,000 people here, I really do. The last time a State or National Tournament was here we packed this place,” L’Huillier said. “These kids have heart and I am a true believer in this team, so whatever the outcome is I’m proud of them.”