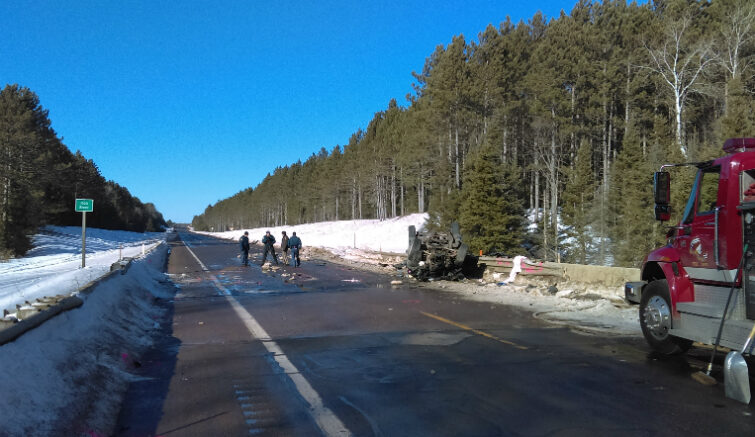 The victims have been identified in the fatal accident that occurred on Wednesday in West Iron County.

The driver of the SUV has been identified as Angela Esbrook, 35, of Iron River. One of the two passengers was a 12-year old female and the other, a 17-year old male, both from Iron River. Both passengers were injured and transported to Aspirus Hospital by ambulance.

Another passenger, Justin Henschel, 14, was pronounced dead at the scene. The operator of the grader received minor injuries and sought his own medical treatment. The accident closed a portion of US-2 for approximately 7 hours. The cause of the accident remains under investigation

Deputies from the Iron County Sheriff’s Office say they responded to a report of a PI accident on US-2 near Wild River Road in West Iron County just before 8 a.m. Wednesday morning.

An investigation into the accident revealed that an SUV had rear-ended an Iron County Road Commission Grader that was clearing off the shoulder.

Three passengers in the SUV were injured and transported to Aspirus Hospital. A fourth passenger was pronounced dead at the scene. The grader operator received minor injuries and sought his own treatment. The names of those involved in the accident are not being released as an investigation continues.

A portion of US-2 was closed for approximately 7 hours.

IRON RIVER — One person is dead after a fatal accident Wednesday morning in Iron County.

According to the Iron County Sheriff’s Office, the accident occurred at 8:00 a.m. CT between a car and a grader truck on US-2 near Wild River Road, just west of Iron River. At this time, it is unknown who was killed in the accident or who caused it.

US-2 is currently closed at Wild River Road in both directions. Emergency crews are still on scene at this time.

There’s no word on any additional injuries. We will provide more information as it becomes available.