If you aren’t up for a road trip, however, you could just drive up the street to Brickside Brewery and put back a few pints. The brewery opened in 2012 and took its name from some local history.

Jason Robinson, owner and brewer at Brickside, said, “We found out that the original name of the business that was in here was Brickside; it was a grocery store, and it was actually kind of a joke because it wasn’t actually brick it was tar paper.”

One of the first things Robinson did was secure a portion of the funding through Kickstarter, which came with a few tough decisions.

“The hardest part was just trying to figure all that out,” Robinson said. “‘How much do you think we can get, or not?’ It’s better to kind of aim low because you can get more, but if you don’t get what you aimed at for the level you don’t get any of it. The big part of it is most of the successful projects have a video done: first explaining, you know, so you can empathize with them, like, ‘I want to do this! This is something I’ve wanted to do; my passion.'”

And then the campaign was successful. 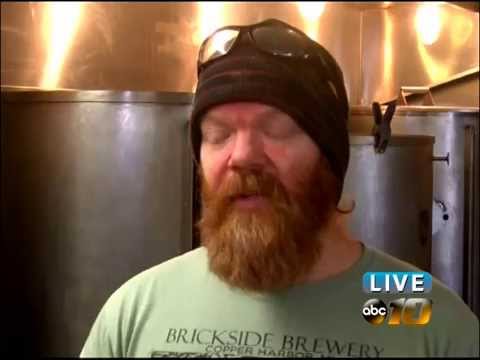 “It was just like, ‘Oh my God, people actually gave me that much money to do something? Oh, crap now I actually have to do it,” Robinson said, jokingly.

With several backers on board Robinson then secured funding from the bank and the rest is history. And with a successful two years behind it, Brickside offers a variety of beers, available by bottle or on tap.

Robinson said, “I don’t like when you go somewhere and the beers taste similar. I like to make sure everything is distinct. I did a smoked porter, which basically I just took my regular porter recipe and threw smoked malt in it just to see what it would do because I’ve never worked with it before, but it turned out well. I really try to make sure that the pale and the IPA aren’t just like, ‘Well, this [IPA] is a hoppier version of  the pale.’ It’s a completely different recipe; it’s got different hops in it.”

Robinson sees more opportunity for growth in Michigan’s craft beer industry as craft beer only amounts to roughly 10% of all beer sales.

When it comes to the U.P.’s role in the industry, some people may forget that it’s a part of Michigan, however, “I don’t think so much with the breweries,” Robinson said. “You go down to the summer festivals and people are like, ‘Hey, you’re from [the U.P.],’ except for that one lady who thought I was from Traverse City. You really get the people from all over that are recognizing that there are breweries in the U.P. that aren’t just like small, little operations that should be ignored. They’re small operations that are producing good beer.”

Some people might consider Copper Harbor the end of the world, but Robinson is happy where he’s at.

He simply wants to make beer and make a living.

Harvey brewery seeing success in its first month of operation