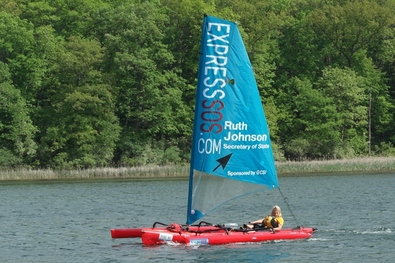 Michigan Secretary of State Ruth Johnson in her kayak.

Secretary of State Ruth Johnson, who earlier this month rode a Harley Davidson to promote motorcycle safety, is at it again – but this time she’s making a seven-mile kayak trip from Mackinac Island to Mackinaw City on Friday, May 31.

Johnson, weather permitting, will be in her personal 18-foot kayak for the trip across the Straits, which could take up to three hours. The Hobie Cat, covered in decals promoting everything from the Pure Michigan license plate to organ donation, is powered by paddles, pedals and is also outfitted with a sail that highlights ExpressSOS.com.

“Let’s hope our Pure Michigan weather cooperates as we kick off the summer season,” said Johnson. “We simply don’t have enough money to really advertise our convenient online services so we had to be creative.” She noted department staffing levels are 25 percent below what they were a decade ago.

Johnson is partnering with the Department of Natural Resources (DNR)  and Shepler’s Ferry for the trip, dubbed “Kayakinac” by her team. The kayak will be making appearances throughout Michigan this summer, including the Traverse City Cherry Festival parade.

UP200 Sled Dog Races are Off and Running