Department of Natural Resources professional land surveyor Matt Dontz used a pair of waders, GPS coordinates, notes from 1850 and a lot of resourcefulness in a recent discovery that he said will undoubtedly be the highlight of his career. While working in Montmorency County, Dontz recovered an original wooden survey post that was set in a stream 162 years ago to mark a section corner used in surveying the land.

In July 1850 when the post was set, The U.S. government’s General Land Office – which laid out the state’s townships in square miles – would set wooden posts to mark a section or quarter corner every half-mile. The posts were usually cedar stakes that were cut and had one end shaped into a point so it could be driven into the ground.

The surveyors marked two “bearing trees” in the vicinity as reference points, or accessories, which could be used later to locate the corners. The live trees were blazed with a mark on the side that faced the post. Surveyors would record the bearing and distance from the post to each tree – this way the post could be found. 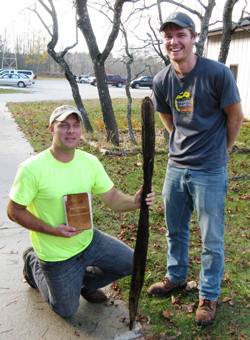 Dontz said that because many of the original bearing trees are gone, and based on the length of time that has passed since the original posts were set, it’s unlikely that another complete post will be found in Michigan again.

“The scenario would have to be very similar with the post submerged in water, preserving it,” he said. “To think that the point of this post hasn’t seen the light of day since July 30, 1850, and probably hasn’t been touched by human hands since the day it was set 162 years ago indicates how special this discovery was. This was unquestionably the highlight of my 13 years of surveying – possibly my career.”

Finding the post wasn’t an easy feat for Dontz or his student assistant Ethan Richmond, who was instrumental in finding the post.

While looking at the original notes from the General Land Office, Dontz noticed some inaccuracies. A corner that was being used for the past 60 years wasn’t in the right place based on the measurements, so he used other corners in the section to find it. The notes said a spruce and cedar were used as the two bearing trees and the original surveyors also noted crossing a small stream west of the section corner.

Using GPS to find and map out the stream that was described in the notes, Dontz measured a quarter corner half a mile to the north that a DNR surveyor reset off of its two original bearing stumps in 1954. Using those two measurements, Dontz calculated a search area. Donning the waders, he began to explore.

He discovered a small piece of stump sticking up that looked like cedar so Dontz yelled to Richmond to check the bearing and distance to the cedar witness that was written in the field notes. With a GPS shot of the remains of the stump, he calculated a position that was within a foot of a waist-deep channel of non-flowing water.

“I jumped in and started feeling around with my feet and then my hands,” Dontz said. “I felt a ton of roots and sticks in the mucky water when all of a sudden I touched something that would’ve been the right diameter of what these posts should be. I pulled hard and 4.5 feet from the end of the piece of cedar I was holding I saw the telltale axe-shaped point. I let out such a scream that anyone within a mile could have heard.”

Dontz had found what other surveyors spend their careers searching for – an original corner post.

“We in the forestry and surveying worlds know just how rare this discovery was; now it’s our job to share the importance of this piece of Michigan’s history with the rest of the state,” said O’Neill, who also serves as state forester. “In addition to being historically important, Matt’s discovery helps correct land maps that had been inaccurate for many years – maps that may be referenced by current and future land users. This finding shows that even with all of the great technology the DNR uses, it’s the boots-on-the-ground fieldwork that still gets things done.”