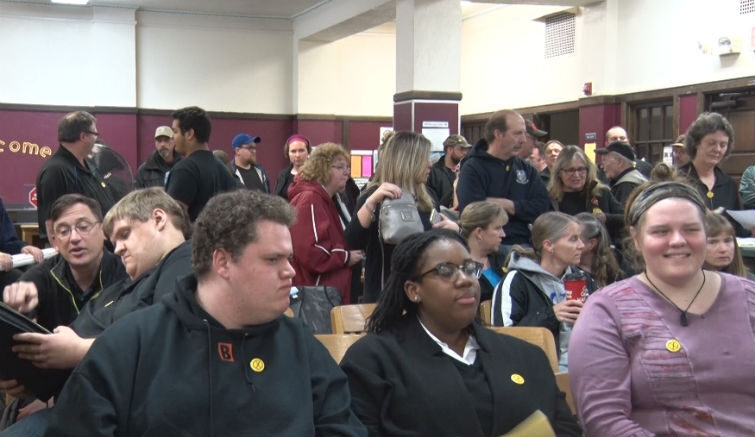 ISHPEMING — With a deficit in its budget, the Ishpeming Public School District has been looking for ways to cut the budget to leave more money for education. One idea going through the Board of Education is privatizing the busing system for the district. Rallying against the idea, community members came to voice their opinion against privatization.

Dressed in black and adorned with yellow buttons, over fifty community members were in attendance at Wednesday night’s Ishpeming Board of Education Meeting. The hot topic of discussion was whether or not the district should privatize transportation in order to satisfy a more balanced budget.

According to Superintendent Carrie Meyers, the Department of Treasury has inquired about the fiscal state of the district, and while it hasn’t been determined to be under fiscal stress quite yet, they’re looking for ways to avoid it without affecting students in the classroom. Over the last year, the board has mulled over the concept of privatization and has heard a handful of presentations from potential candidates while launching their own investigation into the matter.

“The students having safe transportation is our number one priority and the companies that we’ve had come in and do presentations and talks are very much in favor of wanting to hire our current staff and at the salaries they’re currently making,” said Meyers. “We want to maintain our drivers if we move into privatization, but we do save money in retirement and FICA and it’s a substantial cost that the district could potentially save.”

MEA UniServ Director, Diana Kelly, has also been looking into the matter on behalf of the bus drivers who are campaigning to keep their jobs. According to Kelly, the Ishpeming School District maintains a geographical area of 9.77 miles and in comparison to schools with similar sizes, its transportation costs are right in the middle.

The bus drivers have put together a crisis committee in response to the idea of privatizing their jobs and have met with the finance committee about what else can be done. Kelly said privatizing busing will be a detrimental loss for the students in the district.

“Privatizing buses is difficult for communities because you lose that caring, nurturing person who is the first person the kids see when they get on the bus and often times the last person they see when they leave from school,” said Kelly. “When you hire a company that doesn’t know the children, we don’t have that control as a local school district over those new employees. Those bus drivers who work for the district would be officially fired because you’re not unemployed, you’re out of a job.”

With the bid process closing on March 1, this has been looming on the minds of many community members, both within and outside the school district.

“Our current superintendent will not even talk about privatizing anything else because it is such a mess. They’d like to go back, but the first company came in, bought all of cleaning materials, the mops-everything is owned by them and it would be a huge investment to get back into it,” said Gwinn High School Teacher, Darren Smith. “They’ve been trying for years to get out of that system, but it’s kind of a like a drug habit-once you get in, it’s not that easy to get out.”

“You’ll never have enough money again to buy your buses back. You’re stuck with it, but you’ll get off the school board but this town is stuck with it, these taxpayers are stuck with it,” said Ishpeming Resident Stu Skague. “You’re screwing yourselves if you think you’re saving money by not paying into the retirement system. Pay me now or pay me later is one of those things.”

The Ishpeming Association of Bus Drivers did insert a bid for the job. Meyers said March will be a critical month for the decision and will hopefully have a plan in place by Mid-April.

Opening in local school board

Proposal One failed. So, what now?